This is my site. 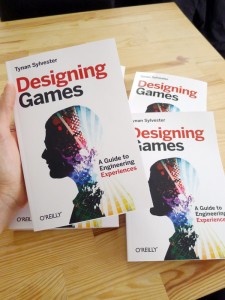 Thanks to everyone who helped me out, in large ways and small.

In some alternate universe, video games are called each of these things.

What did games become in those realities? Does everyone think they should be “fun”? Are there Congressional hearings about how they’re corrupting the youth? Are they thought of as undignified and unsophisticated? Are they violent, sexual, creative, for the young, the old, the smart, the stupid, men, women, the rich, the poor?

How many assumptions spring from a name?

I just signed a book publishing deal with O’Reilly Media.

Look for my game design book out sometime in 2013.

I wrote an article-length and somewhat contrary response to an article on Gamasutra by Tess Jones.

Check out the article and my response here.

Imagine a game of Left 4 Dead in which a player sacrifices his life so his friend may survive a zombie attack. How do we classify this moment?  Is it a story, a piece of mechanics-driven gameplay, or something authored into the game? We can make cases for any of them. It’s a story because it can be recounted like a story. It’s a game mechanical interaction because it wasn’t authored into the game exactly as it occurred. Yet, it was authored into the possibility space of the game mechanics, which were specifically designed to generate dramatic moments like this on a regular basis. It is both a story and not. Depending on how you look at it, it has no author, one author (the designer), or many authors (the designer, players, and the game systems).

We’ve broken our classification system because we’re using it outside its domain. Terms like story and author were created to work in the context of traditional, fixed, recounted stories. There’s no reason to assume they work in games. And, in their unmodified, original forms, they don’t.

The concept of narrative is not absolute. It is merely a label for a cluster of emotional triggers which games happen to share with certain traditional media.

Character development, recounted or related sequences of events, and pre-defined events are examples of design elements which fall under the umbrella of narrative. But this umbrella is not defined by any well-thought-out logical distinction. It is an evolved cultural convention – nothing more.

There is no sharp line between fiction, story, narrative, and mechanics. The emotional mechanisms games use to affect players often don’t fall cleanly into these categories.

I wrote a really long response to Danc’s post Loops and Arcs. It was so long his blog rejected it. So I’m posting it here. Please read his excellent article first if you want this to make any sense.

Cool, Danc. A few thoughts I had while reading.

Interesting approach to the topic of systemic/predefined. I conceptualize this differently – not as a dichotomoy of kinds of experience, but as a spectrum between predefined experiences and experiences which are generated wholly on the fly.

Since some aspect of nearly every game is authored – see the names of the pieces in chess. And since the possibility space of any system (besides real life) is constrained by an author’s decisions about how to build the system, I don’t think it’s right to try to categorize pieces of games cleanly into these two kinds. It seems destructively reductive.

The experience a player gets is always a combination of what the systemic elements of the game generate on the fly (as constrained by their design) and the pre-defined elements authored in (whether they be a character model or an intro movie).

Obviously the experience transforms itself on repeated plays to the degree that it is generated on the fly.

I don’t think that “loops”, as you’re calling them, are nearly as disliked in the mainstream game market as you’re saying. Call of Duty for example, is marketed with videos from single player, but people play it for MP. Ditto Halo. MineCraft, The Sims series, World of WarCraft, StarCraft II, and lots of other really popular titles are very heavily driven by extremely strong systems. Hell, we can throw Draw Something on the pile.

It’s true that systemic design is often underemphasized by the paymasters of the game industry. Publishers and businessmen typically cue into single-threaded story records instead of thread-making story generators. It’s what they know, and it looks good in a pitch meeting. But I think the market itself responds quite well to a well-designed system. Always has. If they want arcs they’ll watch movies (and most of them do).

I don’t think that your description of religious activity as a “loop” is really fruitful. I think what you’re calling a loop is an authored, self-contained system that, when interacted with, spits out experiences. At least that’s how I read it. Religion is an organic cluster of activities, which are not self-contained or authored in a clear way and are designed more to propagate themselves than to spit out experiences. If you’re going to include religion in the definition you might as well also throw in every other interactive part of human life. That is, everything. See my first thought on the spectrum from loop to arc.

My favorite thought in the article was this: “Of the two, loops are rarely discussed in any logical fashion. People note the arcs and comment on them at length while being quite blind to the loops driving the outcomes.”

Now that’s interesting. To me this has to do with the human mind’s obsession with single-threaded stories and lack of natural ability to think in terms of possibility spaces and statistics. This prediliction expresses itself in, say, politics with an undue emphasis on individual situations (“I met a kid who couldn’t afford college…”) instead of the broader statistical reality (“X% of kids can’t afford college…”). And there’s not a chance in hell of hearing about the systemic reality behind those individual or statistical outcomes (“The college affordability rate is driven by…”). Basically we love images of things happening one by one. It’s why 9/11 scared people but car crashes don’t, even though a half million Americans have died in their cars since 9/11.

So everyone talks about games in terms of the threads they generated in their particular playthroughs, instead of the broader statistical reality of what threads the game will tend to generate over all playthroughs with all players. Good stuff.

Overall, a thought-provoking article. Feel free to rip me a new one if I misinterpreted you anywhere.

The skill ceiling is basically the answer to the question:

How much can a player theoretically improve their skill at this game before there is no way to get better?

How good can a hypothetical perfect player be at this game? How much better is this than average performance?

It’s easy to measure games on this scale.

Modern Warfare 2 has an extremely high skill ceiling – so high that no human being will ever come close to it. The game runs at 60fps, game verbs generally have little latency, and the game state can change very quickly. It is possible, with excellent tactics and aim, to eliminate entire enemy teams in moments. A theoretical perfect player in that game could singlehandedly defeat an entire team of very skilled human players.

In the middle of the spectrum, Assassin’s Creed 2 has a medium skill ceiling. A perfect player could do significantly better than an normal player, but would not be so astronomically beyond him as in MW2. Many game actions initiate momentary losses of player control while Ezio swings a sword or grabs another handhold, during which the normal player can mentally catch up with the perfect player. And the gamestate cannot change nearly as fast as in MW2. Even with perfect swordplay, for example, it would take at least 50 seconds or so to kill 10 enemies, since the animations to kill enemies take about 5 seconds. A normal player could probably get quite close to this level of performance with practice, since the optimal strategy does not require inhuman reflexes. Ezio’s performance is limited by the game instead of being limited only by player skill.

At the bottom of the spectrum are games that quickly break down into degenerate strategies, like Tic Tac Toe. Game designers who want their games to play out exactly like the envision them often end up with games like this, since there are so few strategies. This is the problem with using quicktime events as skill challenges. Since there is a binary outcome which can be secured by an average player, there is no difference between an average player and a theoretically perfect player.

Toylikes like The Sims can’t be measured by skill ceiling per se since there is no traditional goal or competition, so this concept breaks down when applied to them.

You’ll note a sharp downward trend in terms of replayability as the skill ceiling falls. The reason for this is that replayability ends as soon as a player consumes all content and hits the skill ceiling. MW2 multiplayer is endlessly replayable since there are always ways to get better, even for players who are inhumanly skilled.

There are two ways to build skill ceiling that I’ve thought of:

The first is the SHMUP method, which is to simply demand such accurate moment-to-moment input that no player could ever do it perfectly. The game simply runs so fast that no human mind can keep up. Racing games, SHMUPS, and fighting games depend on this method to a high degree. Pretty much any game sped up to a high speed will start to do this. Imagine playing Tic-Tac-Toe, but you get a third of a second to make your move. As a mental exercise, you can strip out this element of any game by slowing it down. Imagine MW2 multiplayer played at 10% normal speed.

The second is the Go method. This has nothing to do with twitch skills and all to do with managing complex strategic and tactical information. The game simply presents so many options and variables that nobody can easily see where it is going, even if they can stare at is as long as they want. This type of complexity is harder to do meaningfully than simple high frequency input.

The best games use both these methods. Modern Warfare 2 multiplayer, for example, uses both. Starcraft does as well. Both games are very different, but both have vibrant online communities.

Even in Modern Warfare 2, note the replayability difference between online multiplayer and Spec Ops, which really only uses the SHMUP method of building skill ceiling since the AIs are so simple and predictable.

The above theory is descriptive, but not predictive. I’ll be thinking and writing more about how to design games for high skill ceiling in the future.

So I decided to practice my video editing a bit. The horrifying result: